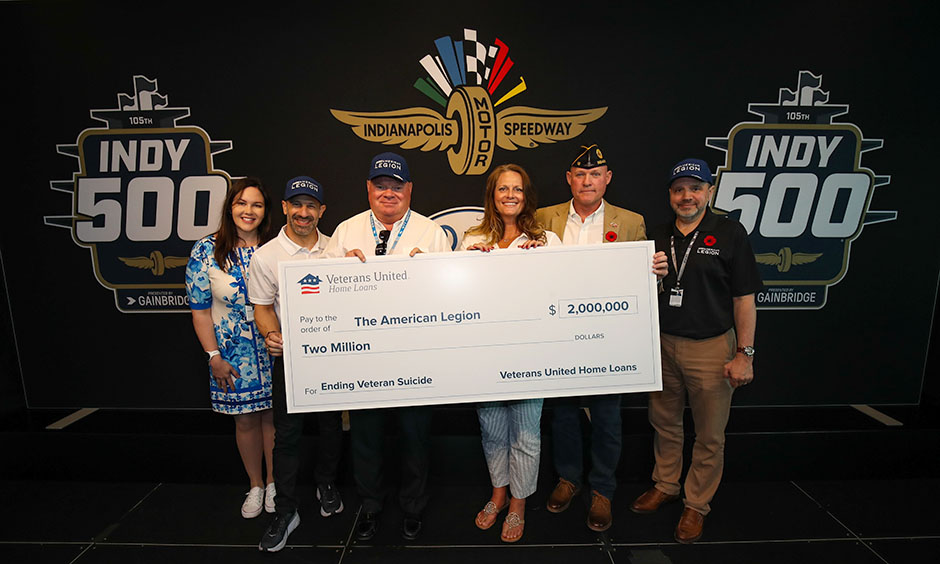 
Chip Ganassi Racing teams up with The American Legion at the 105th Indianapolis 500 presented by Gainbridge over Memorial Day weekend to raise awareness of the most critical issue veterans face today: Veteran suicide.

To kick off the campaign, Veterans United Home Loans presented a check to the American Legion for $ 2 million. The organization will use the funds to expand programs and opportunities for Legionaries to obtain peer support training and distribute important mental health and wellness tools and resources through the American Legion infrastructure.

“Saying ‘We remember’ and ‘Thank you for your service’ is not enough,” said Micheal P. Barrett, member of the American Legion and 17th sergeant major of the United States Marine Corps. “The best way to honor those who gave their lives to this country is to support and protect those who served alongside them. I’m talking about the men and women who have watched their friend take his last breath in battle or experience one of the other horrors of war they now have to live with for the rest of their lives. I am here today to ask you – no, I beg you – to honor our nation’s veterans by joining us in giving all we have to end veteran suicide. “

The organization calls on Americans to honor the dead on Memorial Day and support the living by joining the race to end veteran suicide. Despite many efforts, suicide continues to increase in the adult American population, and suicide among veterans is not a new problem.

The American Legion is concerned that current data from the Department of Veterans Affairs is two years behind current conditions and does not include any figures on the ongoing coronavirus pandemic. Mental health experts have warned that COVID-19 could lead to even more significant increases in rates of mental distress and self-harm among veterans.

“We have to do something now,” Barrett said. “We need to show our nation’s veterans that there are welcoming spaces, like the American Legion, where they can speak with a sympathetic ear and have helpful resources to get the support they need.

As part of the press conference, the organization released a new advertisement featuring racing legend and Chip Ganassi Racing NTT INDYCAR SERIES driver Jimmie Johnson, which draws attention to the fact that more than 20 veterans die by suicide every day. While raising awareness is important, The American Legion says its primary focus will be on bringing change to Capitol Hill, providing programs and training across the country to strengthen peer support networks, leveraging of its national footprint and investing in transformative research that will produce measurable results. The organization plans to work with others who share the American Legion’s sense of urgency to create change.

“From the day we were founded after World War I, the American Legion has been charged with tackling the most significant issues facing our country’s veterans,” said American Legion National Commander James W. “Bill” Oxford. “First, it was the creation of the Office of Veterans Affairs, now known as the Department of Veterans Affairs. Then it was in drafting the GI bill. We continued to study and fight for disability relief for veterans struggling with post-traumatic stress disorder at the Agent Orange exhibit, and much more.

“With our mission and our infrastructure, we can lead the battle to end veteran suicide on all fronts, and that’s exactly what we intend to do.”

Lowry was “ going in the right direction ”

Bank CEOs tell Congress they will work to avoid foreclosures