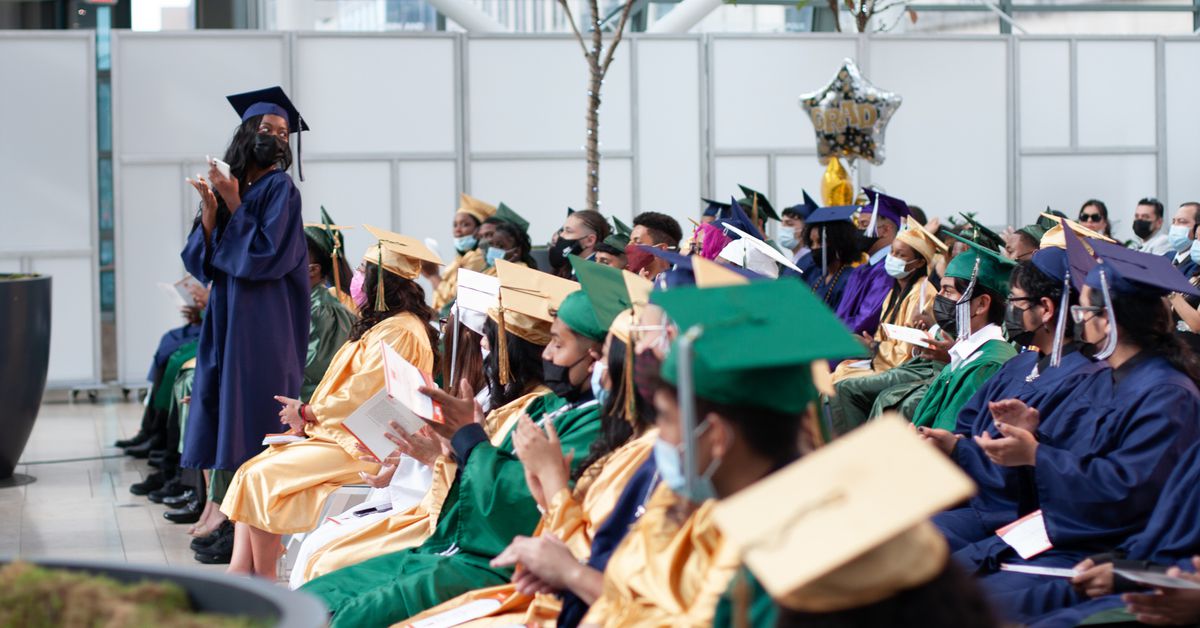 
After graduating from high school, 18-year-old Mahkenzee Osby posed for a photo in her white graduation gown with her 7-month-old daughter perched on her hip.

Osby, who graduated Thursday from Simon Youth Academy at Circle Center Mall, said she felt proud to graduate from high school. After getting pregnant in her first year, she wasn’t sure she could do it on time.

“It means everything,” she said, wiping away her tears. “I finally did.”

Simon Youth Academy, an alternative high school in Indianapolis public schools, was established to help students like Osby overcome the challenges of earning degrees. The school recruits juniors and seniors at risk of dropping out and gets them back on track with one-on-one course loads, one-on-one instruction and opportunities to graduate early.

The academy’s teaching model has proven to be effective even during a pandemic. This year, 62 students graduated from the school, the most in six years of history.

All of the students who were on track to graduate at the start of the year did so, as well as the additional students who graduated early through crash course plans, resulting in a rate of 132% graduation. The academy’s graduation rate has exceeded 100% every year since its inception, school officials said, far exceeding the state average of nearly 88% last year.

More than 125 family and friends, many of whom were holding shiny balloons and colorful bouquets, howled and cheered as their loved ones walked across the stage. Cries of “Go on, girl!” and, “It’s my baby!” echoed throughout the Indianapolis Arts Garden as students lowered their masks and smiled to take photos with their diplomas.

“It means a lot,” said Tina Jackson, mother of graduate Lamonica Venerable, who completed all of her classes last fall. “When she graduates, she can go straight to college, pursue her career.”

Many students, who transferred from schools such as Arsenal Tech, Purdue Polytechnic and Shortridge, said that if they had not found Simon Youth Academy, they were not sure whether they had graduated. .

The Simon Youth Foundation, a national non-profit organization, operates 41 academies in Simon-owned malls across the country. More than 22,000 students have graduated from the academies since the foundation first opened in 1998.

Principal Robert Moses said the Circle Center academy faces many challenges this year, including virtual education, parents losing their jobs, students and their families contracting COVID-19, and more. He was concerned that some students would not complete high school, but was ultimately amazed at the high number of graduates.

“I have to laugh, because some of you did it with the skin of your teeth – but you did,” Moses said in a graduation speech.

Teachers at Simon Youth Academy, who in previous years frequently texted and called students and parents, stepped up their communications during virtual schooling, Moses said. If a teacher noticed that a student was not actively working on their virtual lessons, they would text them to remind them to focus. Teachers often video chatted with students or even went to their homes to check in.

Perez spent the first half of high school at Arsenal Tech and Purdue Polytechnic, where he said classes were typically 20 to 30 students and teachers were often busy or absent.

“They weren’t really into what they were teaching, they were just trying to get through the day,” Perez said.

Partly because of this lack of supervision, Perez said he blunders most of the time with his friends, leading him to drop several classes at the end of second year. Since he was so late, he no longer saw the point in trying.

“I think it was like the lowest point I had come to,” Perez said.

But at Simon Youth Academy, Perez thrived. In the mall’s quiet classrooms, a teacher was always available to answer questions, and because he worked on a personalized class schedule, he could focus on himself rather than his friends. He invented the five lessons he missed in second year and got back on track.

On Thursday, he gave the opening speech for his class.

After Perez spoke, Moses handed him an orange folder. Perez had won a Simon Youth Scholarship, which will provide him with $ 3,750 for up to four years – almost covering the $ 4,500 tuition fee at Ivy Tech Community College, where he plans to major in finance.

“A lot of weight was lifted off my chest,” Perez said. “I can finally make the transition to the next part of my life.”